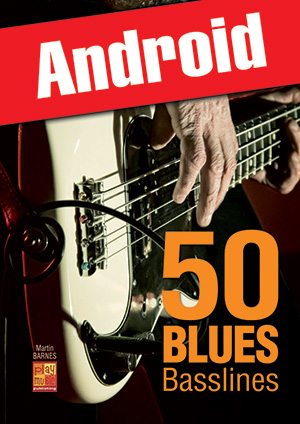 € 19.95  Add to Cart
Author: Martin Barnes
Contents: Multimedia pack for Android
Available: Immediately
Shipping: Download onto tablet
Size : 1291.19 Mo
Download the contents Add to my list
The motto in this tutorial is „Gained in practice, for use in practice“! What awaits you here? No one- or two-bar riffs and licks, but complete chord progressions performed in the style of illustrious blues guitar players such as Otis Rush, B.B. King, Eric Clapton, Freddie King, Buddy Guy, Albert King, Stevie Ray Vaughan or Magic Sam! In the preliminary chapter of this tutorial you will first be taught how to piece basslines together in blues. This won’t only allow you to comprehend the 50 basslines presented here, but, in a second step, it will also enable you to create your own ones. For that you need to learn about structure, rhythm, arpeggios, scales, chromatic approaches ... in sum, to get to know blues by delving into it! The DVD attached to the tutorial offers you the possibility to mindfully observe all 50 basslines – first at actual playing speed, then at a slower speed. This again gives you the opportunity to closely follow the movement of the hands, to choose the right fingerings and keep a steady beat(!) For its part, the mp3 CD is composed of as many backing tracks as there are basslines in the tutorial; the 50 backing tracks are recorded at two different tempi: the intended tempo (actual playing speed) and the rehearsal tempo (slower speed). On the backing track at actual playing speed the bass is only present during the first round, then it disappears, yielding the floor to you. The backing tracks provided here are of an appropriate length (about 4 to 5 minutes each, which sums up to almost 7 h of musical practice). This means that you have enough time at your disposal to practice under the best conditions.

Since you are dealing here with the Android version of the tutorial, the book, the CD and the DVD have been replaced by a tablet-optimized multimedia pack containing musical sheets, texts, audios and videos.