Breaks & Fills for the Drums (Android) 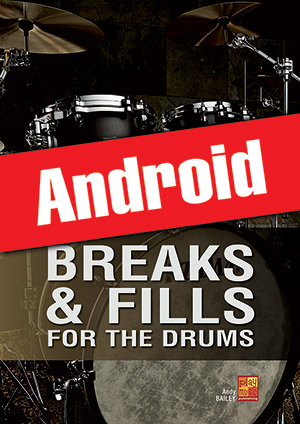 € 15.95  Add to Cart
Author: Andy Bailey
Contents: Multimedia pack for Android
Available: Immediately
Shipping: Download onto tablet
Size : 447.57 Mo
Download the contents in PDF format Add to my list
The purpose of this method is to make you discover, practise and above all actually play breaks and fills on the drum set, whose role is to link the part of a tune with another. As important to master as the drumbeats they “break”, these drum parts can be longer or shorter depending on the role they play. The fills demonstrated in this method are organised according to their length (1 beat, 2 beat or 1 bar) in 6 chapters. In each chapter, technical exercises will give you the opportunity to warm up and prepare to play the beats and fills in a real musical environment with the support of numerous play-along tracks. Each tune is accompanied by 5 different recordings on the MP3 CD included in the method, organised as follows: the drums, at normal and slow tempo, the same drum part played with music and finally the play-along tracks, once again at normal and slow tempo... to allow everyone to learn at their own pace, according to their level and commitment. Enjoy more than 6 hours of music!