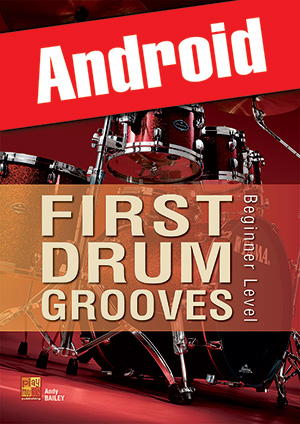 € 15.95  Add to Cart
Author: Andy Bailey
Contents: Multimedia pack for Android
Available: Immediately
Shipping: Download onto tablet
Size : 423.40 Mo
Download the contents in PDF format Add to my list
If you start to play drums, this method is absolutely made for you! Its purpose is indeed to help you play your first drum beats and fills without delay and let you feel the immediate enjoyment of playing music! Concerning your first drum beats, needless to say that the idea is not to blow people away but rather to play simple and rhythmically accurate things. In short, to be a real musician... even if you are a beginner drummer for now! Beginner, but advancing. And that’s why the featured beats and fills will become richer and more advanced page after page, going from quarter notes to eighth notes, triplets and sixteenth notes. By following the logical progression of this method, you will be able to learn and make progress while actually playing! Each of the featured 40 tunes comes in 5 different tracks on the accompanying MP3 CD, organised as follows: drums only, at normal and slow tempo, then the same drum beat played with its accompanying track, and finally the play-along track only, also at normal and slow tempo... so that you can learn and play at your own pace, according to your level and your skills. That is, more than 6 hours of music in total!