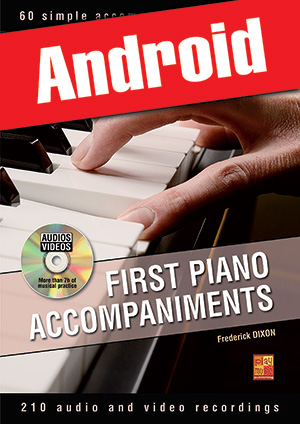 € 15.95  Add to Cart
Author: Frederick Dixon
Contents: Multimedia pack for Android
Available: Immediately
Shipping: Download onto tablet
Size : 827.09 Mo
Download the contents Add to my list
This tutorial will give you a start in your piano accompaniment playing – you can count on it. You will proceed gradually, starting with simple chord sequences, which strictly speaking are piano accompaniments in their most basic form. You will first play them with your right hand, then with your left and finally with both your hands together. Once you’ve got that done, you’re ready to move to the next step: First you will play a series of chord accompaniments, then a series of arpeggio (broken chord) accompaniments and finally a series of accompaniments with melody. Each of the 60 accompaniments included in this tutorial is preceded by explanatory notes providing useful information on the fingerings to be employed and the technical difficulties you might encounter. The data disk (mp3 audio and mp4 video recordings) attached to this tutorial offers a demonstration video and a backing track at two different tempi for every accompaniment listed in the book. This will allow you to perform the rhythms accurately, to keep a steady beat and take delight in playing with other musicians in a band.

Since you are dealing here with the Android version of the tutorial, the book and the data disc have been replaced by a tablet-optimized multimedia pack containing musical sheets, texts, audios and videos.