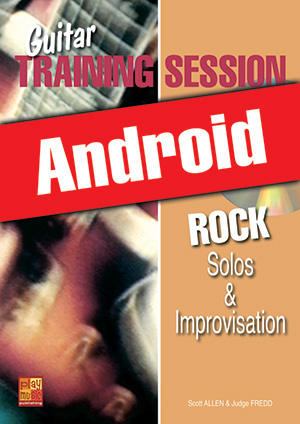 € 9.95  Add to Cart
Author: S. Allen & J. Fredd
Contents: Multimedia pack for Android
Available: Immediately
Shipping: Download onto tablet
Size : 57.53 Mo
Download the contents Add to my list
By offering you the possibility to practice rock improvisations, this coursebook teaches you how to solo in this particular style, letting you perform in a musical environment which simulates actual group situations. The enclosed CD contains 12 complete backing tracks (drums, bass & guitar) to which, as a beginning and intermediate guitarist, you can learn to play the numerous solos proposed in this coursebook contextually appropriately and, as an advanced intermediate or advanced guitarist, you will be able to play personal versions freely in many different rock styles. Thus, while some of you will simply discover the pleasure of playing superb rock solos, others will use the ideas presented in this coursebook to further their personal style and improvisational skills. The songs in this coursebook feature varying difficulties and cover diverse rock directions, such as Classic Rock, Pop-Rock, Southern Rock, Slow Rock, Blues Rock... Armed with this level of knowledge, you are fully prepared to meet all foreseeable future challenges.