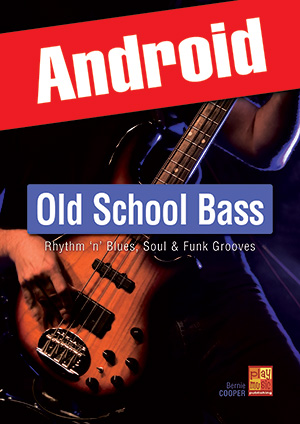 € 15.95  Add to Cart
Author: Bernie Cooper
Contents: Multimedia pack for Android
Available: Immediately
Shipping: Download onto tablet
Size : 1037.16 Mo
Download the contents in PDF format Add to my list
The purpose of this method is to bring you back to the golden age of bass, the 60’s and 70’s and the musical styles that really made it shine: Rhythm ‘n’ Blues, Soul and Funk. These styles deeply influenced modern music, especially in the way the bass was used, giving it a prominent and even key role. At the menu of this method, certainly a must-have for any serious bass player, here are 25 bass lines... to have fun above all, but also to let you make progress musically as well as technically. To give you the keys to these major styles, a preliminary chapter will describe their distinctive features (sound, scales and arpeggios, influential bassists...). The accompanying disc contains audio and video files. The videos (mp4) show all the bass grooves as they should be played, at normal tempo then at slow tempo. The audio recordings (mp3) contain the corresponding play-along tracks in two different tempos too. You will then be able to practise the featured grooves and maybe even develop your own ideas... in the Old School style !

Since you are dealing here with the Android version of the tutorial, the book and the data disc have been replaced by a tablet-optimized multimedia pack containing musical sheets, texts, audios and videos.